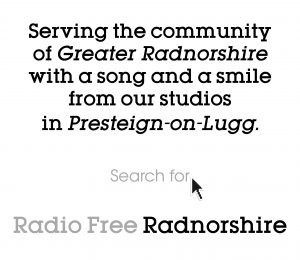 My idea of fun is sitting about chatting and listening to music with friends. That’s why I founded Radio Free Radnorshire. My mate Gary Houghrain did some logos, and I started using a site called Speaker to do some music shows – a few of them are still to be found here –

I really liked playing music on the virtual streaming air, but unless I only played music that I owned or part-owned the copyrights in, really I was being a pirate. I reached the end of what I could play, without stealing artists work or paying proper money.

Now, I am starting again, this time with a proper podcast. It’s very early days. So early you can’t hear it yet. I have recorded a few episodes, and I’m learning how to do a bit of editing. Next, I need to work out how to get them up and running as searchable podcasts. Ongoing, it is. But in the meanwhile, here’s as many links as I can find to the radio work I’ve done for the BBC.

Some of my happiest times have been sitting about in recording studios of various kinds. 40 years in 2018 since I first went into one, and I’ve been sitting about in one today, the Producer’s Workshop at BBC Bristol, with Jolyon Jenkins, the first BBC producer to take me on. Today, we were working on Archive on 4, the Bald Truth. We’ve done a fair few things together, but I can only find two still available ; ‘The Secret Power of Trees’, which features me on a treadmill, and the voice of Bob Rowberry. And this link to the psycho-geography show, ‘Walking with Attitude’, which features me at Bekonscott Model Village and the voices of Will Self, Iain Sinclair and Stewart Home.

Then I did a series of five programmes with the producer Peter Everett, called The Completists, which are not available. It was fun… so when he asked me if I wanted to drive across the US Mid-West in in search of the Devil’s Rope,  that was very much a yes please.

With the producer Mark Smalley, I did a lovely archive hour on commuting, which is not available. But then, we did this show on the growth of self service, in which I build an IKEA chest of drawers.

Since then, Mary has been a huge supporter of what I do, and she has been taking me off on adventures for the recurring Radio Four series, ‘Open Country.’

In this one, we went off-grid in Mid-Wales ; there’s a picture of Bob’s van, because Bob (and Briar) are in the show.

Then I took Mary home to meet Newhaven, so that I could learn to look at the familiar.

Then we went to Lancaster, and found a way along the Dark Side of the Lune.

Sadly, this blew the budget for the whole year, so we came back to our house in search of dragons

Then I went to the Thetford Forest with producer Anne-Marie Bullock, before heading to the far north of Scotland with Mary Ward-Lowery for a journey into space.

And inspired by the One Fine Day project, in this show from May 02019, I went in search of the iron heart of Sussex.

And here’s me as a guest on ‘A Good Read’, basking in my middle-brow taste.

I should mention that ‘North South divide’ has replaced Puch Maxi and tit-rub as the most searched for item on m’website.